Saturday 24th September 2010
We went back to the bottom dam to remove  the hyacinth that was lurking in the reeds. The water level had dropped and where there was water, was now mud; so the men cleared the area by raking the plants out. 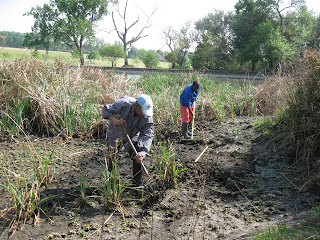 More hyacinth trying to hide in the reeds. 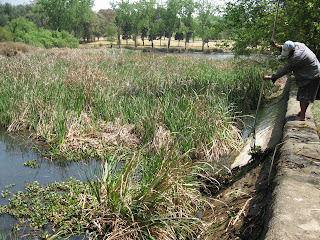 there were about 40 water birds swimming 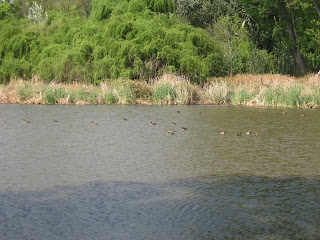 Shirley Tebbutt and Elizabeth Gettliffe are the dynamic duo who have organised the clean-up efforts at Delta Park Dams -- Pierre.


Putting pen to paper, Shirley tells us about her venture


"For a long time I had wanted to clear the Florence Bloom Bird Sanctury dam commonly known as the bottom dam but it was being used for research to find a way to eradicate or control the hyacinth.
In July 2010 Geoff Lockwood who runs the told me the experiment had unfortunately failed and asked me if I would clear the dam. For me an exciting prospect though many people couldn’t understand why I would want to work very hard in cold and smelly water pulling weed.
We had no money but started anyhow -- and again the Delta walkers have donated both money and food. 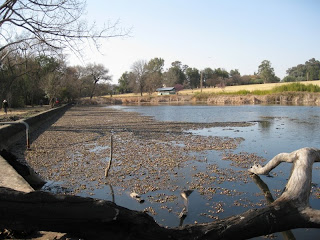 On the fifth day the wind had blown all the hyacinth against the wall. We had to come up with new method. We attached 2 litre water- filled bottles to one rope which was fed along the bottom of the wall just under the weed. The second rope was fed across the water by canoe to the landing place.

DELTA WALKERS DO IT AGAIN - the full story

It was so nice to see the article about the Florence Bloom Bird Sanctuary Dam. Geoff Lockwood and his staff did their three hours for Mandela Day removing hyacinth from the dam in freezing cold weather. Later we also used their basket method for removing the bits close to the edge.
I was delighted when Geoff contacted me to say the research to find a solution to either eradicate or control the weed was over, though sadly unsuccessful and asked if I could clear the dam of the invasive weed. For me it was an exciting prospect though many people couldn’t understand why I would want to work very hard in cold and smelly water pulling out weed.
Back in 2006 we had cleared the top dam of hyacinth and were looking forward to seeing this bottom dam clear as well. This time the weed was different. It was hit by black frost so the top was dead but the plant wasn’t. Already the bulbs were turning green and sprouting so we were working against the weather clock. As it warms up so the weed grows faster and as it is different this time, so were our methods.
My equally enthusiastic friend Elizabeth Getliffe and I set about getting basic equipment and a team of ten unemployed men.
Our method was a bit Heath Robinson but it worked. We used shade cloth as a net which was attached to two ropes. The boatman went out, ensnared an “island” of weed which was pulled in. Then the men used forks to throw the weed onto sheets of plastic and we all took turns running them up onto the grass. Hard work! The heaps of black hyacinth will dry out and in a few months will be mowed with the grass and act as a good compost.
As with the top dam we had no money but started anyhow, and the Delta walkers donated both money and food for the workers.
I even got onto 702 being interviewed with Jenny Crwys-Williams and while on the show we some wonderful donated a canoe, life jackets and the use of front end loaders for a future project – thank you Jenny!
Now come and enjoy our beautiful park; take a walk to the dam below the Conservation Centre, so you can admire the shimmering water which didn't take long to attract the water birds back. It is now possible to enjoy the birds on the open water, which now open to the air is far less smelly.
It will be maintained, first by manual clearing as it sprouts and then with spray along the reed line to keep it weed-free.
I am a committee member of Blairgowrie Community Association (BCA) and am happy with Delta Park as my portfolio.
Many thanks to all the people who donated money, food and drink for the workers and also came to encourage us. Without all of you we couldn’t have achieved this.
Yes, it was hard but most rewarding work!